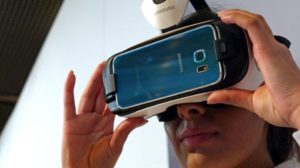 When Samsung and Oculus debuted their Gear VR headset almost a year ago, the companies made it clear the device wasn’t yet ready for the masses. Billed as “Innovator Edition” models, the original Gear VRs were intended mainly for early adopters. They only fitted a limited number of phones — the original was designed just for the Note 4; the second for the Galaxy S6 and S6 Edge — and were also quite pricey at $200 per headset.
Just last week, however, the two companies released the first-ever consumer-ready version of the Gear VR. It’s smaller, lighter, cheaper (only $99) and is compatible with more phones (the Note 5, S6, S6 Edge and S6 Edge+). But, more importantly, its content library has exploded, with more VR apps and games than ever before. Virtual reality has finally gone mainstream, and there’s no better way to get started than with the new Gear VR.

Samsung never made any pretensions that the Gear VR would be small and portable — it’s always been a rather large headset that looks like you have a giant pair of ski goggles strapped on your face. But every iteration of the Gear VR has been more lightweight than the last, and the new consumer-ready version is no exception. Samsung says it’s about 19 percent lighter, and I definitely feel it. The previous models had chunky white plastic around the head straps while the current model has none. This not only reduces the headset’s overall weight, but makes it far less cumbersome to put on. All you do is strap the headset to your head with a couple of elasticized Velcro straps — one around the back of your head and the other around the top — and you’re ready to go. The top strap is technically optional, but I liked having it on for a more secure fit.

The fit, by the way, is pretty excellent. The soft foam padding around the eyes and the nose bridge makes the fit very comfortable (My discomfort came from nausea instead; more on that later). Another upside is that new Gear VR also easily accommodates most glasses — I was able to wear mine without too much shifting around. That said, if you have a relatively lightweight prescription, you might want to go without your glasses entirely for additional comfort. Plus, the Gear VR has a focus wheel at the top so you can easily adjust the focus to match your eyesight.

Like all the previous Gear VRs, the new model is not a standalone headset — it’s essentially a VR viewer for your phone; sort of a fancier version of Google’s Cardboard, if you will. Except that unlike Cardboard, the Gear VR has additional hardware — an accelerometer, a gyroscope and proximity-based sensors — on board to reduce latency and increase the performance overall. 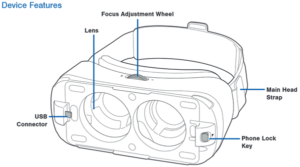 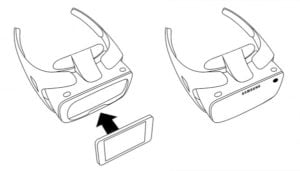 To get started, you’ll have to snap the phone onto the front of the Gear VR so that the display faces the headset’s stereoscopic lenses. Simply dock the phone into a micro-USB dock on the left and then lock it in place with a plastic holder on the right. At least for now, the Gear VR is compatible with four different Samsung phones: the Galaxy S6, the S6 Edge, the S6 Edge+ and the Note 5. Since the latter two phones are slightly larger than the others, the Gear VR has a toggle that you can use to slide the micro-USB dock to the left or right to accommodate the different sizes. Though it seems like the headset’s use is limited to just these four phones, Samsung told us that it’s highly likely the current Gear VR could be compatible with future Samsung phones too.

By default, controls are relegated to the four-way directional touchpad on your right temple. It’s much more contoured than previous Gear VR models plus there’s a raised center nub, which makes the whole thing far easier to use — you can just feel your way around to figure out the controls. Above the touchpad is a back button, which has been relocated slightly to the right for easier accessibility, while a volume rocker is located to the front. 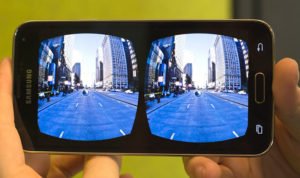 Though it’s not included with the Gear VR, wearing a headphone can make your VR experience more immersive. There are also a few games that would benefit from the use of a dedicated gamepad controller (again, this isn’t included with the headset), which you can connect to the phone via Bluetooth.

A thing to watch out for is battery life. After a solid hour of VR time, the phone’s battery drops by as much as 20 percent. After four or five hours, the phone was nearly dead. Also beware if you do want to keep the phone in VR mode for very long, as it does occasionally get hot enough to overheat.

If you just wanted to get your feet wet with virtual reality, Google’s Cardboard is not a bad start. After all, it costs close to nothing and it’s dead easy to set up. The downsides, of course, is that it doesn’t offer nearly the same degree of sophistication and immersion that the Gear VR does. The Gear VR has straps so you can wear it for hours on end, additional on-board sensors to reduce latency, plus it has a dedicated touchpad for greater control. At the end of the day, Google Cardboard is just, well, cardboard, while Samsung’s Gear VR is a full-fledged dive into virtual reality.

Then again, Gear VR’s performance doesn’t quite compare to more advanced VR headsets like the Oculus Rift, the PlayStation VR and the HTC Vive. For one thing, Samsung’s Gear VR doesn’t have positional head tracking, so you can’t do things like duck behind walls or bend your head down to take a closer look at something on the ground.
The other headsets also promise to be far more powerful — the Rift and the Vive will be powered by high-end gaming rigs while the Playstation VR will harness the computational prowess of the PS4. That should lead to a higher fidelity experience with better graphics and better physics — features that even the best smartphone won’t be able to match. 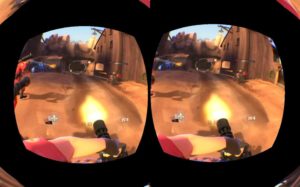 Yet, those other systems aren’t even available to the public yet. Plus, they promise to be much more expensive. Though the prices aren’t official just yet, rumor is that they’ll cost at least $300 each. And that doesn’t even include the cost of a high-end gaming PC, which could be well over $1,000. If you plan on going with the Playstation VR, a PS4 isn’t cheap either, retailing at around $350.
Even if you were to buy a Gear VR along with a compatible Samsung phone, that would only run around $500 to $700 if you get your phone off-contract. Additionally, all three rival headsets need to be tethered to their source computer, which limits your movements when playing games. The $99 Gear VR, on the other hand, is completely mobile, letting you swivel around on your chair or take it anywhere.

If Google Cardboard gives a taste of virtual reality, Samsung’s Gear VR offers up a whole feast. With just the addition of a smartphone, you can get a truly immersive VR headset that lets you travel distant lands, watch movies and shoot up spaceships in alien worlds. It’s comfortable to wear for hours at a time — even if you wear glasses — and controls are intuitive and easy to understand.
Yes, it’s only compatible with Samsung’s latest handsets and no, it’s not quite as advanced as headsets like the Oculus Rift. But at only $99, Samsung’s Gear VR still makes for a great entry-level VR headset for the everyday consumer. If you already have a compatible Samsung phone, it’s a no-brainer.