Will Underground Roadways Systems save cities from traffic nightmare

The bane of the traffic jam. And the go-to solution (i.e. building new roads or expanding lanes) often just causes more congestion. Busy cities constantly cope with traffic caused by a variety of issues: accidents, construction zones, weather, bottlenecks, lane blocks, and simple fluctuations in daily traffic levels. Waiting in traffic is most assuredly annoying. But it also has deeper ramifications for society.

There is an ever-present need to develop systems to deal with increased congestion. For everyday errands, drivers opt for small changes in their route, or leave a little earlier, or a little late. But more intrusive traffic congestion might cause individuals to make bigger decisions and change their job or living location. Economic conditions are impacted with increased travel times too, (e.g. goods not arriving, goods perishing, etc.)—all increasing the costs of these goods and services.

Above the Ground Solutions

Easing major thoroughfare congestion usually involves above ground solutions, at least in terms of still allowing the general population to commute with their own method of transportation. Underground solutions are not a new concept. Subways, trains, boats, etc. are all employed as ways to swiftly move people where they need to go, by shifting them down below. So, could roads be added to these below-ground options, letting cars weave beneath the ground via tunnels just as they do above it? Elon Musk, of Tesla fame, thinks so.

Avoid the Traffic by Going Under It

Mr. Musk has his hand in a variety of innovative transportation solutions. From heading Tesla and producing electric cars to space exploration with SpaceX, Musk has now turned to another vehicle conundrum: traffic jams. His initial undertaking: the congestion in Los Angeles. Recently, Mr. Musk revealed his concept at the TED2017 conference in Vancouver.

His concept is based on building tunnels beneath a city to form a roadway system. Cars would access this underground system via elevators. Imagine driving along and you see a traffic jam ahead. What are you to do? Up on your left is a parking spot that is actually an elevator. You pull your car onto it and it lowers you to a level below the ground. You enter a stream of vehicles that are swiftly moving along roads. You’re out of the melee above and on your way. Because the other cars below have exited the system from the surface (and vice versa), theoretically, congestion can be relieved. Returning to the main roadways above requires picking up another elevator point of entry.

The notion of a mirrored roadway system below the surface appears to be a terrific way to reduce traffic congestion. To those who embrace anything technology, it is lauded as a grand vision. To the other side, it is quite the logistical construction nightmare. But his proponents tout the fact that Mr. Musk has already been behind several science-fiction inspired gadgetry. His critics remind us that he has also spent billions of dollars in capital while underestimating production schedules (and failing to deliver on time).

Last year China came up with a bizarre transportation idea of a straddling bus which travels above the existing road. Now the guardian reports that this project has been scrapped since then. 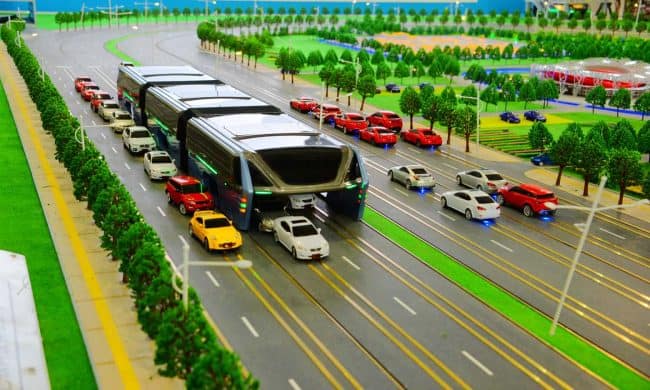 Skate Below the Surface

The vision for the roads includes a magnetic feature. Cars leaving the surface would be lowered, with roads coming and going every which way. These roads would be within tunnels drilled on a variety of levels, to accommodate the ability for many cars to escape jams above. The car would also remain on the contraption it drove onto. This skate of sorts would zoom (up to 130 miles per hour) along the magnetic rail to its destination.

At the conference, flying cars were also a topic of discussion. But Mr. Musk cautioned against pursuing air transportation. He feels that attempting to ease traffic jams by lifting people up causes more issues than it solves. When you have flying vehicles, you still have pedestrians below. And those individuals are unlikely to feel very safe with so much activity going on above them. Although, one could offer his same futuristic plan and see it as an above ground magnetic levitation highway. This method would seem to be a cheaper option too.

This year, the city of Dubai got a test run of what they call Autonomous Air Taxi AAT. The two-seater electric drone is another promising idea for the urban transportation problem. The city authorities have an ambitious target to make autonomous transport account for quarter of the city transport by 2030.

But Does This Really Address the Real Problem?

Commuters quickly realize that after a road has had lane expansion, everything quickly fills up again. More space leads to more traffic, so all that added space now suddenly has a bunch of cars on it. The fancy term for this phenomenon is “induced demand.” Basically, when drivers encounter less traffic on roads, magically, they keep going on these same roads, and others join in too. That is why, even if a multi-layer maze of tunnels could be built below the surface, drivers might find themselves in the same traffic congestion below as on the surface. Congestion was predicted decades ago. It might simply be unsolvable.

This article was a Guest contribution. If you would like to submit your guest post, please read our guidelines.