Are you struggling to attract followers or stimulate engagement with your company’s Twitter handle? Try these six simple tips.

One of the surest ways to become a social media influencer is to share “up” — that is, retweet and repost content created or shared by other influencers. As long as you’re respectful and measured in your engagement, this activity will raise your social media star, boosting your follower count and driving engagement with your own handle. 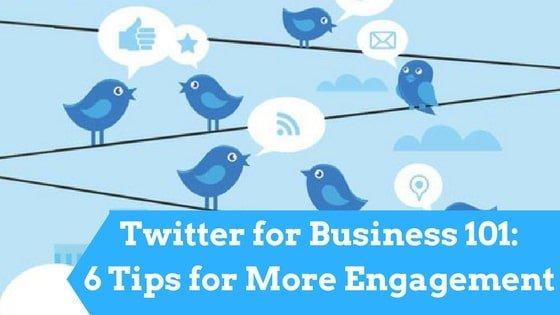 Many corporate Twitter handles aren’t shy about self-promotion. While there’s nothing inherently wrong with sending out the occasional commercial tweet, too much of this activity can turn off followers. In fact, many experienced Twitter users, like Miami entrepreneur George Otte, send out virtually no self-promotional tweets. They stick to topics relevant to their industries or specialties without overtly singling out their own enterprises.

Twitter recently raised its per-tweet character limit to 280 from 140, but you shouldn’t see this as a license to be long-winded. In fact, you shouldn’t change your tweeting strategy at all. Short, punchy tweets continue to work best in most situations.

Your corporate Twitter handle is not the appropriate venue to discuss topics not directly or tangentially related to your business, particularly those likely to attract controversy or incivility.

If you do need to discuss politics, religion, or other hot-button issues not related to your business on Twitter, use your personal handle for those interactions. Though it’s still important to maintain civility and avoid crossing bright ethical lines with your personal handle, it’s much more appropriate to mix business and personal interests there. NBA superstar LeBron James tweets about a wide range of matters related to basketball (his vocation) as well as social and political causes about which he feels strongly.

In that vein, choose your Twitter engagements judiciously. Don’t reply to every ill-conceived comment from semi-anonymous followers or chime in on a public conversation with no direct bearing on your business. Avoid liking and retweeting potentially controversial or irrelevant tweets, too.

Twitter is built for sound bites. Even with the increased character limit, it’s not always possible to fully communicate what you mean in a single tweet. If you do need to get across a complicated idea or longer announcement, keep the explanation to a single tweet or short thread highlighting the main points. Then, follow up with a link to a fuller explication — a news release, article, video, whatever.

You’re well aware that Twitter isn’t the only social media platform with a clear business purpose. In fact, it’s not even the most effective: that honor goes to LinkedIn.

Your company’s social media strategy should include every property for which you can identify a clear business case — not just Twitter and LinkedIn, but Facebook, Instagram, Pinterest, Snapchat, and niche platforms as well. Your customers are waiting out there, and savvy social media use can shine a powerful spotlight on them.

Pixelied is a burgeoning graphics design tool for designers, owing to its vast template designs, the editor and user interface is super fast and...
Read more

Does Vaping Increase risk of COVID-19: What to Know

For some time, vaping has been marketed as a healthier alternative to smoking. Some people have even argued that vaping can help smokers quit...
Read more

It is satisfying sitting on a chair that allows you to rest, relax in back and forth movement. Rocker chair offers this unique comfort....
Read more
TechGYO
Facebook
Twitter
Linkedin