Drones are an amazing piece of technology that allows you to feel like a real pilot, and when you add FPV goggles into the equation, the experience is adrenaline raising. Now, for those of you who are not familiar with the term FPV, which stands for First Person View, meaning that you get to “sit” in the pilot’s cockpit and have that realistic piloting sensation.

The system behind all this is not that complicated, and it consists of an onboard camera and feed transmitter that are attached to the front end of the drone, and goggles that have an inbuilt receiver that sends the live feed to the display in the goggles. When we put it that way, it sounds quite simple, doesn’t it? But, it’s not as simple as might seem and there is quite a lot of science behind it. But we won’t get too much into science and focus more on what you need to keep an eye (or eyes in this case) when choosing FPV goggles for your aerial adventures, and reviews of some of the best models on the market. First, let’s start with the important features.

Important note: The models that we reviewed in our article are the crème de la crème of the FPV world and not suited for everyone’s pocket. Therefore, if your budget is limited, you can also check out the article that talks about cheap FPV goggles and find one that is within your budget.

Like with any other product, before buying FPV goggles, you need to know what to pay attention to, or you might end up with a model that is not right for you. Here in this article, we have listed everything to help you in making your decision:

Like with any other video display, the resolution the goggles offer is critical. The formula is simple – The higher the resolution, the better the experience. You need to watch for models that come with VGA, SVGA, or in case your budget is high, you can look for the Pro models that offer FWGA.

Now to explain it a bit more. The VGA offers 640×480 pixels, while the SVGA comes with 800×600 pixels. The last option, the FWGA goggles, offer 854×480 pixels. But, you should keep in mind that FWGA resolution is pretty much useless if your onboard camera is not HD.

The higher the value of FoV of your goggles is, the more realistic the experience you will have while flying your drone. It’s just like in the movie theatre, the bigger the screen, the more you will enjoy the film, right?

In most cases, FPV goggles offer a FoV range of 25 to 45 degrees, and the more you pay, the greater FoV you get.

Now, this is a cool feature that we would recommend to those who already have some FPV flying experience. Because it offers you a chance to control the camera movement with your head (the camera follows the movement of the goggles), but it takes some time to get used to, and that is why we recommend if you haven’t tried FPV flying before, to go with a fixed camera option. Once you get the hang of it, you will have a feeling that you are in the pilot’s cockpit and can even enjoy the scenery around the drone while flying it.

Top FPV Goggles On the Market

When it comes to FPV goggles, the Dominator HD2 is the full deal and the most wanted model among the Pro Drone Racers. They come with the highest resolution among the consumer models, the SVGA 800×600 pixels, the biggest FoV value on the market (50 degrees), and support the Head Tracking feature. Furthermore, the HD V2 goggles also include an HDMI input, meaning that you will still be able to use them when the next-gen racing link system, the so-called Amimom zero latency HD is released. Another feature worth mentioning is the built-in DVR for flight recording.

As for the battery, the goggles use an 1800mAh battery, located in a pocket on the head strap. The battery can be recharged with the RC battery charger that you probably already own.

The package includes the following:

Goggles
1800 mAh battery
Charge cable adapter
HDMI cable with mini to standard and mini to micro adapters
3m AV cable
DC DIY cable
Zipper carry case
If you are looking for the best FPV goggles on the market, you have found them.

If you are no stranger to racing drones, then you know that the Arris brand is well known for making the best racing drones out there. But, they make some of the best FPV goggle models as well. Their flagship model is the one we reviewed today, namely the Skyzone SKY-01S. With a 40 channel receiver, and the WVGA resolution of 854×480 pixels, they offer the best picture quality on the market. However, their downside is that the FoV is only 30 degrees. 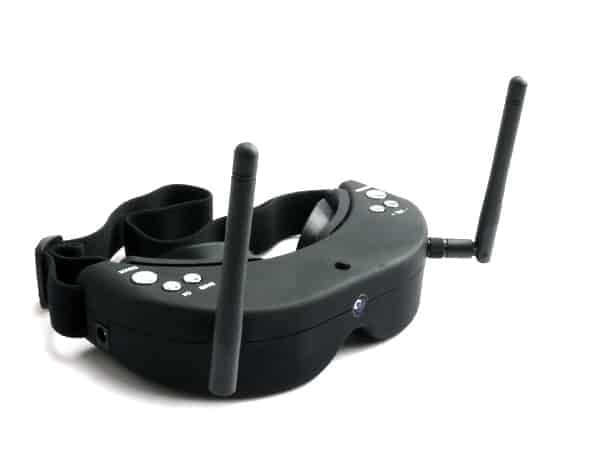 But, other features that these goggles offer still keep them on the top and the narrower FoV than the HD V2 model is not a real deal breaker actually. Those features include the contrast and brightness switch, which allows you to adjust the mentioned two with only long or short press of a button.

Another feature that you will probably like is the use of a diversity video system, which comes with a pair of different video receivers, as well as a pair of antennas, allowing you to have a clean signal and block out any interference.

Furthermore, like the Fatshark model, Head Tracking is available, but with such a narrow FoV, you would have to twist and turn your head, maybe even more than possible, so this feature is not that useful with this model.

So, in general, you will not make a mistake if you buy the Arris FPV goggles, but keep in mind that they are not as good as the Fatshark HD V2 model.

Another model from the Fatshark brand, only this time, we are talking about a cheaper model, meant for those who are not Pro Racers, but you can actually see many of them using this model because they are really among the best on the market, but cost some $200 less than the V2 model. 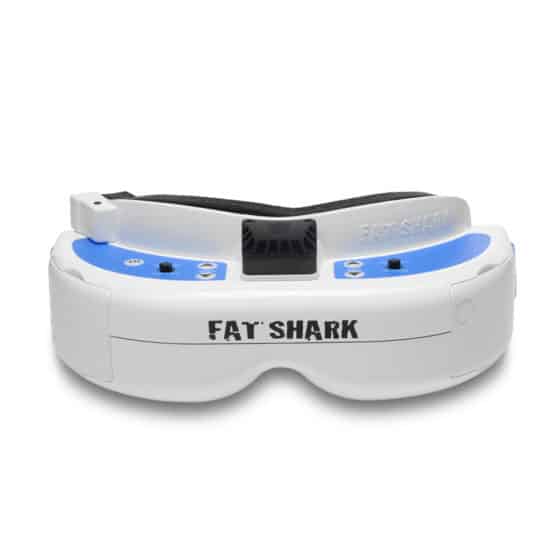 These goggles are built to allow you to upgrade them as you advance, thus the modular design that lets you expand their functionality, and the module bays that allow you to use a range of bands, going from 1.3GHz to 5GHz. They support 720p and use the HDMI connectivity.

As with the previous two models, Head Tracking is possible, but when it comes to racing, that is not a smart idea as you need to have a fixed “screen” to focus on fast flying and not looking around.

When it comes to the battery, like the V2 model, the Dominator V3 goggles come with an 1800mAh battery, and again, your RC charger will get the job done without a problem.

All in all, the V3 goggles are not as high-end as the V2 and the Arris model, but they are way above the rest of the models on the market and a exceptional choice for both FPV beginners and Pro Drone Racers.

Okay, now you know the top 3 FPV goggle models and you only have to make a choice. Honestly, picking any of the mentioned will be a great choice, and it just comes down to personal taste and the size of your budget. If your pocket is deeper, go with the Fatshark HD V2 or the Arris model. But, if you want to save some money for some other drone parts or new batteries, the Fatshark Dominator V3 will be more than good for adrenaline raising flights.

We hope that our article gave you the needed inspiration, and that you will feel free to share it with your friends and social media. Happy flying!