Top 3 Drones Currently on the Market

Looking for a drone, but don’t know where to start?  You came at the right place.

Whether you are into drone racing or aerial photography, we are featuring the 3 hottest drones currently on the market that will totally give you the thrill you are looking for.

Portability is the latest trend in drones right now. Pilots want a drone that they can take anywhere. However, when we say compact it always translates into fewer features, thus lesser capabilities. 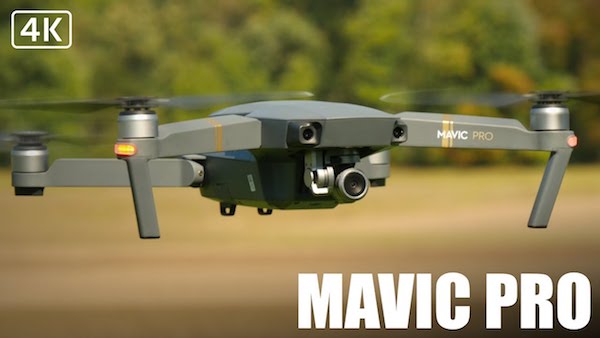 But it was not the case with the DJI Mavic Pro.

You see, it is one of the most portable drones in the market, which happens to be loaded with features you find in its predecessor, the Phantom 4. Imagine all the things we love about Phantom 4, only this time, smaller and lighter.

DJI has really outdone themselves this year and it showed on this latest drone. To make Mavic portable, instead of the usual fixed-arm hull, they featured a set of folding arms and props. This clever configuration  allows the drone to fold down neatly. It can turn into a neat little package the size of a brick, but not quite as heavy. Even with the rotors and battery, the whole unit weighs just over one and half pounds.

Another amazing feature of the Mavic Pro is the OcuSync, an all-new video transmission system which extends Mavic’s maximum range to over 4 miles. It also boosts the drones resistance to interference, even in mild winds. At a shorter range, the OcuSync allows streaming as well as downloading videos and photos at 40 mbps, which is absolutely crazy.Mavic Pro can also fly indoor thanks to its Optical Flow feature which help hold its position even without GPS. Couple it with the new “Tripod Mode”, Mavic is optimized to fly  in tight areas or spaces. Plus, all the features and parts of this gadget is built to last.

There has been a talk about the drone’s camera in terms of how it treats focus. The Mavic lacks the auto focus feature. Instead, it lets you choose the subject. There were a handful of pilots criticizing the drone’s muddy and blurred footage. However, when we tested the drone for ourselves, we got crisp and smooth shots. The trick was to snap focus during the shot.

Though, we certainly love the Mavic Pro, there is one flaw we found with the machine. Its gimbal is held in place with four small rubber bands which seems to us to be a bit fragile. If one of the rubbers snap, then the camera will have trouble stabilizing itself. The result will be shaky, almost Jello-effect photos and footages.

But overall, given the size and the magnitude of features this machine offers, DJI Mavic Pro certainly raised the bar in its category. Combining power and portability, it is easy to see why the rest of the competition is far behind.

DJI with its Phantom series has always dominated the drone marketplace. However, lately Yuneec has been stealing chunks of the drone giant’s market share. And with its latest offering the Typhoon H, it may well change that. 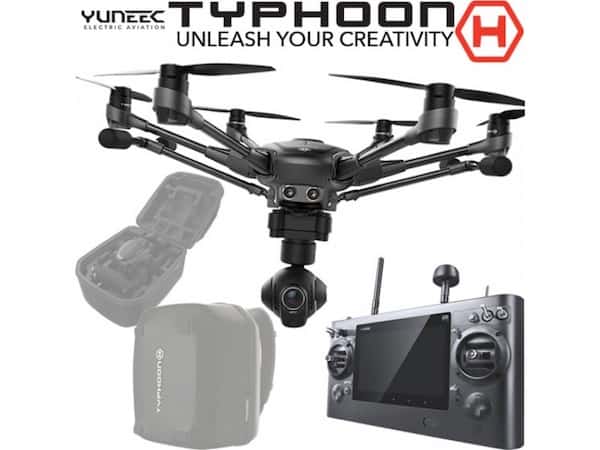 The most noticeable feature that set Typhoon apart is its six rotors instead of the usual four. And it only needs five to fly. So if for some reason you lose a rotor mid-flight, you do not crash or splash immediately. The drone has the ability to recognize the problem and will fly back to home position for repairs.

The second feature we love about this hexacopter is its camera’s ability to swivel 360 degrees. Unlike the P4 which can only pan up and down, the Typhoon allows you to catch images at all angles. It’s landing gear is designed to retract at a flip of a switch so it will not get in the way of your shots.

Another cool ability of the Typhoon H is its use of sonar in avoiding obstacles. In fairness to P4, it has the same avoid tech feature too. But unlike the Phantom’s sense and avoid tech which is based on visual, Typhoon H uses sound pulses. This means the hexacopter can still avoid obstacles in low light and even in pitch dark. This drone is perfect for first time flyers as well. Even if you are not the best pilot, the drone can help you get beautiful and stunning footages. You can put the drone in one of its auto-flight modes so you can focus on panning the camera. Its full suite of auto-flight modes includes Cable cam which allows the drone to fly a route drawn by pre-set coordinates; Orbit Me which tracks the location of the controller and steadily orbits you in a wide circle, Journey which makes the drone takes off automatically and fires off a selfie.

It would be a lot to control for first timers, so we suggest getting comfortable with flying the Typhoon first before you try flying in these auto-pilot modes. On top of all that, Yuneec’s Typhoon H comes with its own controller, the ST16 ground station as other prefer to call it. The ST16 is a beast. You don’t need a tablet or smartphone to fly and use this drone to its fullest. It also has a built-in 7-inch touch screen for streaming live video and displaying telemetry data.

While it is true that the Yuneec Typhoon H promises a really good flying and aerial filming experience, it is not the sturdiest drone in the market. By looking at those thin arms, it feels a bit flimsy compared to the P4. We feel like if we crash it too hard, the drone will not live to fly another day.

Dubbed as the king of drones, the Phantom 4 Pro is the most popular quadcopter in the planet. It is packed with premium features and functionality that keeps its competitors a mile away. 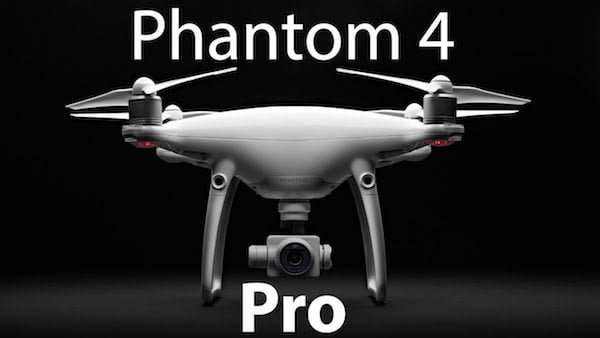 The phantom series has been DJI’s pride. And with its latest model, DJI took a smart approach in refining and improving the already popular Phantom platform.

In the looks department, you can hardly tell Phantom 4 from Phantom 4 Pro. They are both big, white plastic drones that rests on sturdy-looking legs. However, that is where the similarities end. Under the hood, the most obvious addition in the P4 Pro is the 5 direction obstacle system.

Whereas the P4 has only a forward facing sense and avoid tech, the P4 Pro has sensors on its front, back, left right, and  underside. These sensors actively scan the environment which allows the drone to automatically avoid buildings, trees, lamp posts, benches and any other obstacles it may encounter during its flight. You can even fly through a narrow doorway without hitting the door frames!

More unbelievably, you can fly the P4 Pro for up to the speed of 31 mph and still have its obstacle avoidance system fully functioning. The camera is even bigger, better and more customizable in the P4 Pro. It can shoot 4k video for up to 60 frames per second and still images to up to  20 megapixels. This means that this quadcopter can take more challenging and professional quality images and videos. Even the low light performance is enhanced in the P4 Pro. The result is a smooth, more fluid images.

If there is a flaw in the DJI Phantom 4 pro, it is the fact that it does not share the portability of Mavic Pro. And its price is a whooping $1500. But considering all the bells and whistles the drone has to offer, I say that this drone is arguably one of the best way to spend your money away.

About the Guest Author:

Ben Sawyer is a blogger and content contributor, from Queens, NYC.  Currently he likes to share his knowledge, helping people in anyway he can, one article at the time.