Why Xamarin Proves to Be Perfect for Enterprises

The problem for companies to support their applications on multiple platforms like Apple, Android and Windows Phone is increasing. Xamarin, previously Microsoft’s partner  and now acquired by it, is proving to be the perfect solution for enterprises that want to develop their applications. 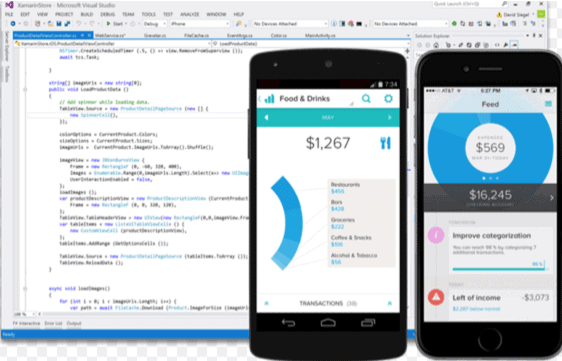 This transition from  old-school methods to Xamarin for mobile application development didn’t take much time, since developers are understanding the framework’s advantages. The use of Xamarin is proving to be better than languages used for native development, such as Objective-C, Swift and Java.

Below are the reasons why and how Xamarin has succeeded in grabbing the attention of developers and enterprises as fast as it has, and why many enterprises are now moving towards using Xamarin for mobile application development.

The use of C# (C-sharp) in Xamarin for application development has been a great source of attraction for enterprises. This easy-to-use and  flexible language provides some great benefits for developers. The use of C# itself somewhat ensures the success of mobile applications designed using this language. There is arguably less work for  developers to do, and the outcomes are much better and achieved quicker. So, the developers can ensure quick time to market and can manage more projects faster.

Another benefit along with speedy work is that C# supports asynchronous programming (async). This feature allows applications to be quick and responsive, and the feedback recording time is reduced, unlike other languages where callbacks are used.

As C# is rated among the best languages, it is definitely positive for Xamarin.

Since the language is designed in such a way that it can be used across all mobile platforms, the quality of programming has enhanced. Developers can focus more on devices and other technology rather than work on each platform separately. The shared application logic is also used in this procedure to help getting information and feedback from all the platforms.

C# has increased developers’ potential. Developers have less things to worry about, and with lower time pressure, they can perform better. The language used in Xamarin is easier to use, and any developer working with other languages can cope with this one easily. Working cross-platform enables developers to work on all the platforms simultaneously and fix any bugs, if any, and all of that can be dealt with in a single developing environment.

This benefit has convinced many large enterprises to use Xamarin, with many more planning to do so. The time-saving factor can be  crucial for enterprises when they have to provide quality work to a lot of people. At such times, a handy yet professional business partner like Xamarin and Microsoft can come in to bring bigger value. According to Xamarin, enterprises are flooding in towards them. According to their stats, their platform is used by 20% of Fortune 500 companies in 120 countries. This gives us an idea of how quick Xamarin has been gaining success so far.

The Test Cloud by Xamarin makes it possible to perform tests on quite a large number of real devices at the same time. This helps developers to recognize almost all the bugs there are. The time saved with this feature can be used on other projects and can boost up the application launching phase for enterprises.

The Xamarin Test Cloud also provides a dashboard with several metrics and detailed reporting methods which also help to fix bugs and make sure to provide applications which are totally optimized for end users’ experience.

Different types of APIs and plugins in Xamarin help developers to exclude almost all compatibility issues for different devices. Tests can be run much easier and for many devices at the same time. Compatibility of hundreds of devices on different platforms can be checked and modified in less time through these features. This is because Xamarin provides native-level support for all types of device hardware from general to specific. This helps developers to add up more native functions into applications.

The use of C# language and native libraries along with .Net facilities also provides developers with an option to reuse codes for other platforms. The time saved through no switching between the platforms, keeps developers away from hassle and helps to focus on what is necessary, which is of course  end user experience.

Xamarin is the Future

According to Iflexion, Xamarin has a promising future. Many say that with the technology and advancement that Xamarin has brought, it is obvious that in the future people will start to learn about Xamarin more and the pace will keep increasing. The traditional languages have their own benefits and are definitely here to stay, but the ease and proficiency provided by Xamarin will soon make its way through, if not already.