Livefyre: Spice Up Your Blog’s Comments With Livefyre Comment System

Got bored with the traditional Word-Press commenting system and wanna try something new that attracts your visitors? Here is the nice and robust commenting system which is ready to replace your WP commenting system. Livefyre is the best comment platform we are talking about which changes the way people interact with your blog by its advanced features such as real-time conversation, seamless integration, tagging and sharing etc.. Livefyre is available in both free and professional plans to suit your requirements, we’ll discuss about it later. Let’s have look at the salient features of Livefyre.

Livefyre comes up with fantastic features, most useful feature of Livefyre include-

Livefyre comes with stylish and smooth interface, comment box and buttons crafted with rounded edges attracts everyone. Livefyre comment system allows you to like the comments other write and follow the conversation as well. Here in livefyre comments can be sorted by either newest or oldest. 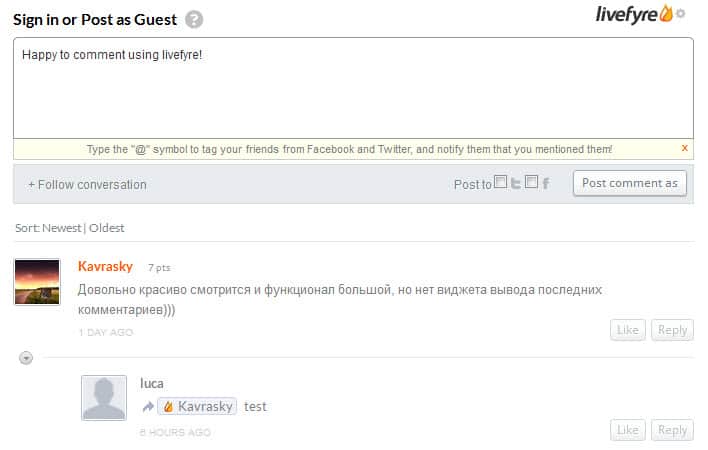 Livefyre is available in free and professional plans. Free plan includes all the basic features needed for a standard blog and if you wish to have some extended features then you could go for Livefyre’s professional plan that is powered with Fully Customizable Interface, Custom Domain Emails, True Single Sign-On and 24/7 Customer Support.

Facebook
Twitter
Pinterest
WhatsApp
Previous articleFlashback Malware: Is Your Mac Safe? How to get it of it
Next articleVolvo V60 Plug-in Hybrid- World’s First Diesel Plug-in Hybrid (Sponsored Video)