VPS or a Dedicated Server: What are the Main Differences?

Those serious about their websites generally choose between VPS (short for virtual private server) and dedicated servers even though there are other options available. While each of the two servers can make for a successful website, there are several differences between them. If you’re a webmaster you will want to understand these differences before choosing one over the other. Making the right decision can save you a load of future hassles if your website is successful and you need to scale up your hosting requirements. Below are the major differences between VPS and dedicated servers. 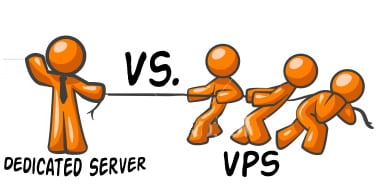 Obviously, price is a very important factor to consider when comparing the differences between VPS and dedicated servers. In almost every case, dedicated servers will be more expensive than VPS. However, with the extra expense come a number of features that are not offered with VPS. At the other end of the stick, not everyone has a need for all of these special features so saving money on VPS can easily be a benefit.

Dedicated servers are almost always more predictable than VPS. The main reason for this is that you have more control over them. Since a dedicated server is being used by only one computer, it can be rebooted as needed, completely customized to suit your personal needs, and new software can be installed on a whim. Dedicated servers experience far fewer problems than VPS do.

Bandwidth and storage are important elements for every webmaster to consider. Both VPS and dedicated servers generally offer unlimited bandwidth and unlimited storage. However, VPS is more likely between the two to have some restrictions set on CPU power and memory.

Both VPS and dedicated servers are easy to use. However, different people may find one or the other easiest. VPS are generally better for those users with minimal or average web hosting experience. They make things very user-friendly and most offer customer support lines to help you through problems. Dedicated servers, on the other hand, aren’t so straightforward but allow a number of advanced customizations to be easily made which are hard to do with a VPS. Advanced computer users will greatly appreciate this freedom.

Though it can be tough to choose between a VPS and a dedicated server, when you understand the differences between them it is made a ton easier. It is important to keep in mind that many of the differences can benefit users of each type of server depending on the user’s personal experience, needs, and preferences. Take the differences explained above into consideration when making the decision for a server for your website.

Frank Ashton is a business website hosting consultant. He enjoys sharing his experience and acquired knowledge on various hosting blogs. When looking for a hosting solutions for your website, it is worth checking out host ratings from the customers of the most popular webhosts.

How To Build Successful Websites

Having an attractive, engaging, and informative website is almost mandatory for businesses to thrive in this digital age. For customers, it becomes...
Read more