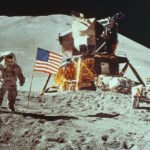 I was just stumbling around and saw a page where it says “See the Moon in 3D” I was curios whether Google has launched new product. Yes I was correct. Google has introduced new feature in Google Earths’ new version Version 5. 0. Not only that you can view moon in 3D but also checkout the exact land site marked with Placemarks with the details of the different Apollo missions. I just clicked on Apollo 14 to checkout more. It gives a summary of the mission. Including date of launch, name of the landing site etc which you can checkout below.  You can find 20 such Placemarks where Apollo 14 mission landed. You can find Placemarks in each Apollo missions. Google teamed up with scientists at the NASA Ames Research Center to prepare the collection of lunar maps and charts. You can explore all the Apollo missions to landed on Moon

With Moon in Google Earth, you can:

How do I watch Moon on 3D using Google Earth?

If I’ve missed anything or if you’ve found some more interesting options to explore Apollo Moon Mission by Nasa, please let others know by commenting below.