Benefits of a Solid State Drive over a Hard Disk Drive

Not so long ago buying a hard drive was a straight-forward thing to do. You would find a few of the highest capacity drives you could afford, compare the speed of each drive and then order the fastest one.

Now, with the introduction of SSD (Solid State Drives), it’s a little more difficult when it comes to making your decision. Before you even start looking for a new drive, there is one fundamental question which you need to know the answer to Which is best, SSD or HDD/SATA? 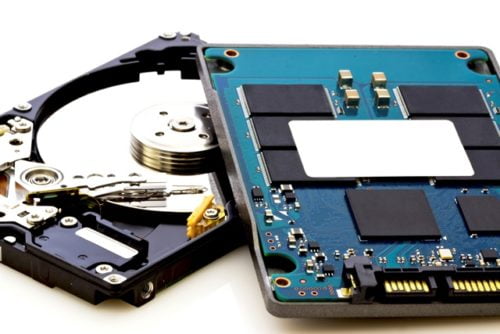 The answer, hands-down, is SSD, and here are the reasons why:

Traditional HDD access data in about 5,000 – 10,000 micro-seconds, while an SSD will access the same data in just 35 – 100 microseconds, almost 100 times faster. Having access speeds this much faster allows your programs to run more quickly, especially for programs like your operating system which need to access a large amount of data. Computer start-up times can be as little as a few seconds when using an SSD.

Thanks to SSD having no moving parts, they are much more reliable than traditional HDD which wear down the more use they get. SSD failures are a rare occurrence, unlike HDD failures which are fairly common.

SSD uses a considerable amount less power than traditional HDD, notably because SSD doesn’t have to power any movement of the platters like they do with HDD. This means it will save costs on your electricity bill over time, and when used in laptops, means a longer battery life.

If you have a computer with traditional HDD, you have more than likely noticed the noise it makes when it’s in use, you can hear the drive spinning away – either during start-up or while saving or retrieving data. This is not a problem with SSD, thanks to the fact that they have no moving parts, they are completely silent.

SSD generates a lot less heat than HDD because it doesn’t have any moving parts, this helps to increase its lifespan, its reliability, and keep the temperature inside your computer lower.

Again, magnetism won’t be a problem for most people, but it’s worth noting that an SSD is not affected by magnetism at all. HDD on the other hand relies on magnetism to write information to the drive, so your information could be erased from an HDD if it comes in contact with strong magnets.

Unfortunately, there are a couple of disadvantages with Solid State Drives too, not in terms of use or performance, but price and capacity:

As you can see, the benefits clearly outweigh the disadvantages of an SSD, and for most people, SSD is the obvious choice. Some users who require large amounts of storage space would find it more cost-effective to combine SSD and HDD, using the SSD to install your operating system and software, and using the HDD to store your data. But, if you don’t need Terabytes of storage space, standalone SSD is definitely the way to go.