Smartphone Smack Down: BlackBerry Z10 vs. The Galaxy S4

The Samsung Galaxy S4 lives up to all the hype – it’s faster, lighter, and bigger than its predecessor, the Samsung S3. But can the Galaxy S4 stand up when compared to the Blackberry Z10?

The Z10 is lightweight in terms of specs, but the display and processor are quite competitive and ideal for professionals. Are those features enough to stave off the fierce competition? Read on to find out. 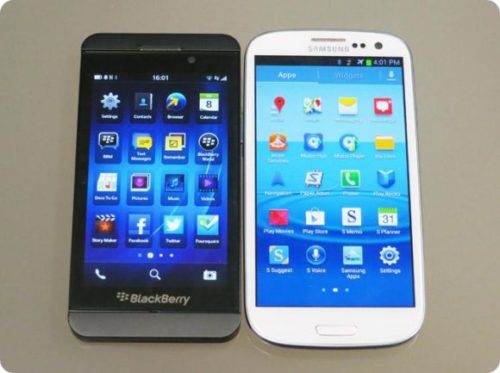 Compared to the S4, Blackberry’s flagship phone seems minuscule with measurements of 66×130 mm. And with a width of 9.2 mm, it’s not quite as slim and the S4, but it does fit snugly in the palm of your hand.

The removable plastic back cover on the Z10 leaves a lot to be considered, but it’s hard to criticize given the Galaxy S4’s similar plastic build. On closer inspection, you’ll see the phones are designed this way with good reason. Both phones are designed for travel and to fulfil their functions without breaking.

Samsung received numerous nods because of the S4’s more striking features, but if you’re looking for a slick but discreet handset, you’ll be thrilled with the BlackBerry Z10 smartphone.

It’s hard to find fault with the 5 inch display and the 1080×1920 full HD resolution on the Galaxy S4. They make the 4.2 inches on the BlackBerry Z10 seem small in comparison. But size isn’t a tremendous deal because users can still browse the web, watch videos, and use apps without skipping a beat.

When paired with a resolution of 768×1280, the screen size of the Z10 carries one of the highest pixel densities of any smartphones on the market.

Both phones display crisp and clear images and text. The colours are vibrant but realistic. One concern is BlackBerry’s display, which gets dirty with fingerprint marks as there’s no oleophobic coating.

When it comes to hardware, the Galaxy S4 is no slouch. The 600 quad-core processor and 2GB RAM rival most other smartphones on the market.

BlackBerry went for a 1.5GHz dual-core processor and 2GB of RAM to power the Z10. When compared to the quad-core processor used on leading smartphones, the dual-core chip may seem inferior, but this doesn’t pose a problem for the BlackBerry 10 OS. There’s no sign of lag when using the phone to browse the web and carry out daily functions. Regardless of which phone you choose, network providers like SingTel are offering speeds of up to 150 Mbps on the 4G network, so browsing and business apps should work fast virtually anywhere you cat a signal.

The Samsung Galaxy S4 is available in 16GB, 32GB and 64GB models and includes a microSD card slot that accepts 64GB cards.

The BlackBerry Z10 has some limitations in that it’s only available in 16GB models. However, it does include a microSD slot for cards up to 64GB. Since the BlackBerry 10 operating system takes up almost 4GB of storage, you’ll certainly need to use the microSD slot if storage is high on your list of priorities. Check out this guide for more info on the BlackBerry Z10 storage and other features.

The images and videos from the 13Mp front facing and 1.9Mp rear facing cameras on the Galaxy S4 are impressive, but the phone’s capabilities do not stop there. The camera app features burst mode in addition to Dual Shot, Drama, and Sound and Shot modes. More than just gimmicks, these modes enhance your pictures as you’re able to capture moving objects and take pictures using both cameras simultaneously.

The main camera on the Z10 is a modest 8Mp and includes a dedicated IP, F2.2 lens, LED flash and backside illumination (BSI). The rear camera has the capacity to record 1080p HD quality videos. The photos are vivid, but the main attraction on the Z10’s camera is Time Shift. It lets you take numerous snaps in one sitting, and you can later adjust the image or individual elements as you wish.

The editing software built into BlackBerry 10 is top notch. Use it to tweak and edit your photos before uploading them to your favourite networking sites.

The cameras on both phones function better than most standalone cameras, but they won’t replace your DSLR.

BlackBerry launched its new operating system, BlackBerry 10, on the Z10. The interface may be baffling at first, but if you persevere, you’ll have the swiping navigation figured out in no time.

The main home screen on the BlackBerry 10 operating system remains blank until you launch an app. You can find all your open and recently used apps displayed in small windows, but you can pin your favourites for fast and easy access.

The BlackBerry Hub, located on the left side of the home screen, is a business executive’s dream. It’s a notification centre where you can manage all your accounts. Open the hub by swiping to the right. When you’re finished checking your messages, you can swipe back down to close the hub and return to the home screen.

The keyboard is another fascinating feature on BlackBerry 10. It displays suggested words as soon as you begin typing, and you can choose the word you want with one swift swipe. It’s unique, but certainly one of the many features you’ll love on the Z10.

With heavy usage, you’ll have to charge both phones almost daily. Although the S4 will hold its charge well for a couple of days with light use, it’s not realistic to have this type of smartphone and not put it to use.

The Z10 has a removable battery pack that has about one day of battery life with moderate to heavy use. The Samsung comes out on top as it relates to battery life, but not by much.

Both smartphones offer superb performance and high-end features. The Galaxy S4 is perfect for overall entertainment with its big screen and Google Play app. But if you’re purchasing a phone with your business in mind, the BlackBerry Z10 will provide everything you need. The enterprise tools, server side security, messaging hub, and email are all designed with business activities in mind.

Greg West is always on the lookout for new ways to enhance his business. He then shares them online by posting on a variety of blog sites.