All Sixes: How Will the iPhone 6 and the Galaxy S6 Compare?

It’s no secret that the tech world is always looking for the next best thing. This battle of “one-upping” each other is most visible in the smartphone market, where Apple, the currently reigning juggernaut, is being kept on its toes by its Android counterparts. With the iPhone 6 looming on the horizon, the Android faithful look to the Samsung Galaxy S6. Although there are faithful Apple followers, and devoted Samsung fans, some consumers are undecided. Keep reading to learn how the iPhone 6 and Galaxy S6 stack up to one another, and what it could mean for loyal followers. 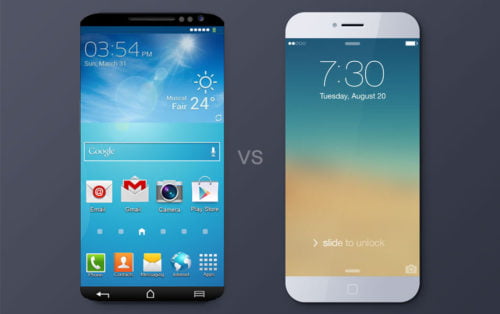 The Samsung Galaxy S5 boasted a gorgeous 16 MP camera, and it seems the Samsung Galaxy S6 will further improve its camera tech with a 20 MP camera. Apple, on the other hand, is likely to stick with its current resolution (8 MP) and instead rely on its image processing software for improved picture quality. This could hurt Apple as their competitors continue to develop advancements for their built-in camera apps instead on expecting customers to purchase additional software.

Price may not be the deciding factor in buying a phone for everyone, but for some, this makes a huge difference. Both Apple and Samsung will likely be pricing their respective phones similarly, both ranging between $650 (for a base model) and $1,000 (for the high end, full capacity models). While the high price might deter some customers, it won’t keep the device die-hards from lining up and camping outside the store before the releases of these two phones.

All signs point towards Samsung maintaining their Super AMOLED screens, while the resolution itself will receive a boost to the tune of 2560 x 1440. The screen resolution of the next iPhone is a bit more ambiguous. Some say Apple has been testing a technology that triples the number of visible pixels, and that the iPhone 6 could sport a resolution of 1704 x 960. Others say a 2560 x 1600 display is more reasonable. While actual screen size is a big element in the competition of smartphones these days, the resolution is becoming increasingly more important with new technology that can improve this feature.

Both Apple and Samsung are notorious for their secrecy. While rumors, photos from the factory lines and inside sources have all leaked information, it’s important to remember that nothing is a fact until announced. Still, take some of the rumors on this list to heart and you might hear them confirmed as company announcements start rolling out later this year. The information for this article was provided by the smartphone experts at appleshark.com who provide an iPhone trade in program for those with outdated or broken iPhones.

AUTHOR BIO: This article was written by Dixie Somers, a freelance writer who love to write for business, finance, women’s interests, and technology. Dixie lives in Arizona with her husband and three beautiful daughters.