You should also read my vipre antivirus  ,  Bitdefender antivirus and avast antivirus reviews to chose the best from among three.

Kaspersky Anti-Virus 2012 has a lot of improvements over the previous version, Kaspersky 2011. One of them is flawless installation. As some of you might remember, Kaspersky 2011 had a bug that messed up the installation process if it detected any traces of previously installed security software. Thankfully, this issue got fixed in the 2012 edition.

Once installed, the product needs to be activated and updated before it’s ready to go. The initial database update is about 80MB, which doesn’t take all that long to download if you have a fast Internet connection. 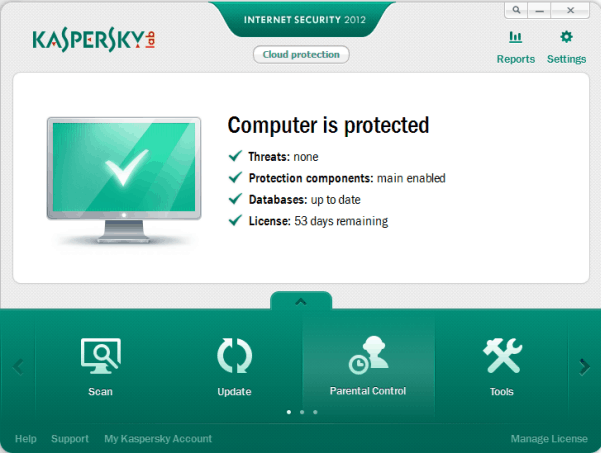 Kaspersky Antivirus 2012 looks very different from the 2011 edition. The program doesn’t have the familiar tabs on the left format and goes for large buttons near the bottom of the program window instead. You can slide the features bar sideways using the little arrows to access more features and options. There is also the new Cloud Protection button at the top of the screen. Clicking on that button opens a new screen that explains how to use the new Kaspersky cloud technology. The new interface is very clear and makes all features and options easily accessible.

Kaspersky Antivirus 2012 has quite a few new features:

Kaspersky Anti-Virus 2012 is not the lightest and the least resource-hungry anti-virus out there. In fact, it can be quite heavy on system resources and slow down the performance of older PCs quite significantly with all its default settings enabled. KAV 2012 can increase the average system boot time by 25 sec. and double the average shut-down time. On top of that, it can make older systems sluggish and even result in freeze-ups if you have 1GB of RAM or less.

Unlike some of its competitors, this product doesn’t focus on quick scans. Even though the software promises to complete a quick scan in 3 minutes, it usually takes something between 8-10 minutes to complete.

Kaspersky Anti-Virus 2012 has proven to have very good malware detection rates. In the tests performed by AV-Tests the product scored 5.5 out of 6 on Protection and Repair, and 5 out of 6 on Usability, and gained an overall score of 16 out of 18, which is one of the top results.

The new Kaspersky 2012 offers very solid real-time threat protection thanks to its new dual cloud plus local approach. It’s not the lightest nor the fastest anti-virus, but the protection is pretty good. About the

Author: Liz Cornwell specializes in computer optimization, software reviews, and Windows tips and tricks. Liz is a regular contributor at http://www.dailydeals4you.com – a website that provides antivirus coupons for software like Kaspersky, Bitdefender, and other popular antiviruses.

Liz Cornwellhttp://www.cornwellwriting.com
Liz is an experienced freelance writer and the founder of Cornwell Writing Services. She specializes in computer tips and tricks, software reviews and other tech-related subjects.