It was on Friday, 11th November 2016, that Facebook accidentally declared many of its live users (including Mark Zuckerberg) dead after which it fixed the problem and acknowledged for committing such a “terrible error.”

“For a brief period today, a message meant for memorialized profiles was mistakenly posted to other accounts. This was a terrible error that we have now fixed.”

People around the world took it over to Twitter (social networking site) for reporting about this uncanny error. And in fact, more surprisingly the very-much-alive Facebook co-founder & chief executive “Mark Zuckerberg” too was memorialized in a message at his facebook profile page expressing hope to those people who loved him. The ones who were spared of the error ridiculed facebook for making them as the exceptions. 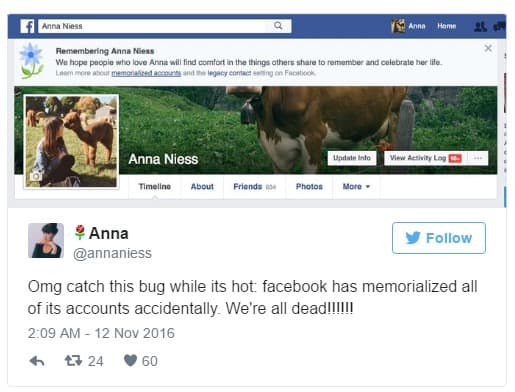 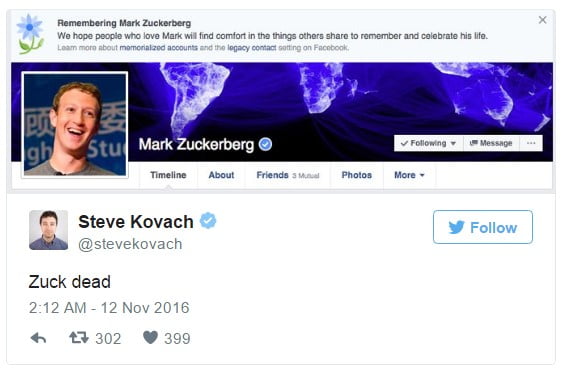 The media reports intimated that around two million errant memorials were posted on the facebook profile pages. The network has apologized after all the nuisance and said that it would work as quickly as possible to correct the dilemma.
Danny Sullivan, Search Engine Land editor said in a message on Twitter

Facebook Live is a feature that lets people broadcast videos in the real-time at the leading social networking website.
Notices of the mistakenly posted memorial contained the links to the forms that can be submitted to have the facebook accounts modified into online memorials after they die. And part of the process is displaying the proof of death. Some people even joked about the error moving the confidence of people from Facebook’s feature of checking safety after disasters, or about its claim that deceptive stories are not a worry at the social networking website.
A not-dead-yet Mark Zuckerberg maintain the integrity of News Feed stories during an on-stage converse at a Techonomy conference in California a night before being memorialized on his facebook profile page. Mark straight away refused the idea that false stories shared on the social networking website paved a path of success for the President-elect Trump.

Mark Zuckerberg said during an on-stage talk at the conference,

“The idea that fake news on Facebook, which is a very small amount of the content, influenced the election in any way I think is a pretty crazy idea,”

CEO Mark Zuckerberg refutes all the claims calling them ‘crazy’.
He also added at the Technonomy conference that,

“Personally I think the idea that fake news on Facebook, which is a very small amount of the content, influenced the election in any way — I think is a pretty crazy idea. Voters make decisions based on their lived experience.”

The #FacebookDead hashtag went viral after the error took place. It was a deadly plague that had wiped out a larger portion of the population altogether. And the ones who were memorialized by the Facebook (social networking website) had the following message written on top of their Facebook profiles:

“Remembering ( Name ). We hope people who love ( Name ) will find comfort in the things others share to remember and celebrate her life”.