Using the LED in your house, the ‘Li-Fi’ can make it hot upto 1GBps!

We’ve all fantasized about superheroes and being one self.
Well, while you might still be working on your batman armoury,
the internet ‘flash’ is here to rescue us from those long sessions of candy crash till the torrent travels in our pocket.

Using the LED in your house, the ‘Li-Fi’ can make it hot upto 1GBps!
Li-Fi is a super-fast alternative wireless technology similar to Wi-Fi, that allows data to be sent at high speeds using VLC, visible light communication

Professor Harald Haas’s invention, from the University of Edinburgh, is finally moving from research labs to the real world. 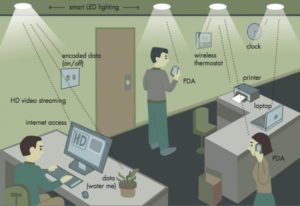 “All we need to do is fit a small microchip to every potential illumination device and this would then combine two basic functionalities: illumination and wireless data transmission,” Haas said.

A recent finalist at the Slush 100 startup competition in Helsinki, Velmenni, has already begun trialling the technology within offices and industrial environments in Tallinn.

100-times faster than current Wi-Fi technologies, the Li-Fi technology used by Velmenni in the pilots is able to send data at up to 1GBps!
At these speeds, a high-definition film could be downloaded in just a few seconds!

In talks with IBTimes UK, the CEO of Velmenni, Deepak Solanki told that currently they have designed a smart lighting solution for an industrial environment where the data communication is done through light.

He also revealed that they’re also doing a pilot project with a private client where they’re are setting up a Li-Fi network to access the internet in their office space. 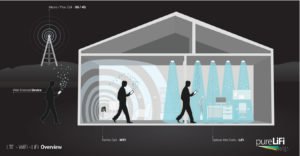 As light cannot pass through walls, Li-Fi allows greater security on local networks. Which also means there is less interference between devices.
Li-Fi has several advantages over Wi-Fi, but the most significant advantage is the speed that the technology offers.
In lab conditions, researchers have achieved speeds of 224 gigabits per second!