A newly leaked Samsung product is set to change the aesthetic paradigm of the smartphone.
The Korean forum website clien.net leaked photos of the upcoming Samsung smartphone, the Dual Screen Galaxy Folder. At present, the modern smartphone has almost no variety in form. The bland, single surface touchscreen model has dominated every brand and market with lawsuits erupting over what little variations were available. Would you like your corners rounded or squared? The Samsung Galaxy Folder is poised to upset the status quo with an updated, beloved, retro design. 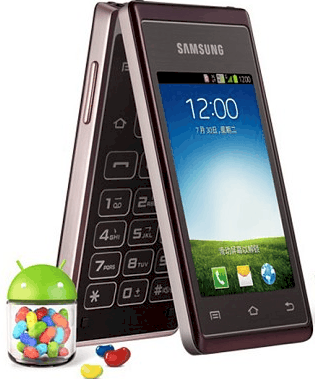 Samsung’s dual screen Galaxy Folder brings back the once ubiquitous flip-phone, or clamshell, design complete with the simple, yet dramatic, clamp shut to hang up feature that ended so many calls in the early 2000s. The phone features an old school alpha-numeric keypad below a 3.7 inch fully functional touchscreen when flipped open, and a second 3.7 inch touchscreen, which functions like a conventional smartphone, when closed.

The question is: will consumers be willing to shell out the extra cash necessitated by the additional screen?

Testing the Waters in China

The clam-shell style phone has already seen two iterations exclusive to the Chinese market. The first was the SCH-W999, and the second was the SCH-W2013, which Samsung priced a prohibitive 19,000 yuan (around 3000 US dollars). Some of the price might be chalked up to the rather expensive marketing campaign Samsung ran for the phone in China.

Samsung pulled out all of the stops for the release of the W2013, launching the phone with a sponsored charity concert and picking up an endorsement from Jackie Chan. The Korean based company appears to feel that the Folder’s two, somewhat more clumsily named, predecessors were successful enough to warrant an updated model released in a new market.

One thing that will not be giving prospective consumers second thoughts is the Galaxy Folder’s technical specs. Leaked figures put the phone on par with other top of the line smartphones currently on the market.

The 3.7” Amoled display comes in at a clear resolution of 800×400 pixels, and the phone’s primary and front facing cameras boast 8 megapixel and 2 megapixel resolutions, respectively.

Most of the Galaxy Folder’s upgrades come on the software and computing power fronts. The new phone will support 4G LTE. The Folder will run on the newer Android. 2.2.2 Jellybean operating system. It is backed by a 1.7 GHz dual core processor by Snapdragon, an improvement from the 1.3 GHz W2013. The RAM is set at the current high end standard in the industry of about 2 GB.

The hard drive is likely to hold about 16 GB of memory, equivalent to the Galaxy S4 or the starting capacity of an iPhone 5 S. Hopefully the phone will come with the standard Samsung feature of external SD card compatibility that can boost hard drive memory up to 64 GB.

The Galaxy Folder makes a few other notable modifications on the W2013. The leaked photos show that the new edition sports a stylish gold colored trim along the side that was absent on its Chinese counterpart. It also replaces the selection button for the Chinese specific dual SIM card compatibility function with a photograph button. Finally, the phone provides a USB port so users can easily connect their phone to computers and printers to take full advantage of their camera and Ink Technologies.

When and Where Can I Get One?

At the moment, it seems that Samsung’s dual screen Galaxy Folder will only be available in the corporation’s home nation of Korea, and Samsung still has not set a price for its new smartphone. The date of the phones release also remains a mystery to consumers for the time being. However, considering that the leak cited above was sourced on the Samsung webpage, it is reasonable to assume that the phone is well on its way in the Samsung product pipeline.

The chances of a wider market for a smart flip phone appear to be promising. One of the largest smartphone markets in the world already has its own version, and it appears that another major market will have one in the near future.

The most exciting possibility is not just that Samsung will decide bring its new, innovative clam-shell smartphone to a market near you, but that the company will pioneer a path for other companies to innovate on their phone designs, leading to a new breadth in the variety of smartphones. Hopefully, when the style enters more markets it will leave the luxury price tag behind.

What do you think of Samsung’s new Dual Screen Smartphone? Is Samsung trying too hard to stand out with an antiquated style, or are they tapping into a potential market that has been glossed over by other companies? Do you think the phone will meet a good enough reception to warrant development for further expansion in new markets? Would you buy one?