Echo Automotive’s EchoDrive is an innovative add-on hybrid drive system that transforms your gas/ diesel vehicle to electric vehicle, but it won’t affect the performance so you will get the same output as of a gasoline or diesel driven vehicle. In brief EchoDrive is an environment friendly and cost-reduction solution for converting fleet vehicles into highly fuel-efficient plug-in hybrids. 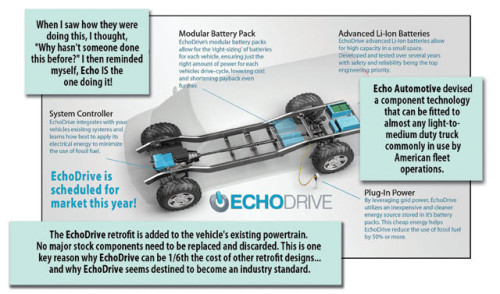 EchoDrive is a best and much awaited solution to convert commercial vehicles intro hybrid which improves the fuel economy of your vehicle and saves money on fuel costs by utilizing the proper combination of electric and fossil energy. According to a study EchoDrive doubles the fuel economy by converting a stock 10 mpg vehicle to 15-20 miles per gallon. Along with this, EchoDrive helps to keep the environment safe from carbon emission.

Echo Automotive’s EchoDrive comes up with advanced electric motor, system controller and modular battery pack which could be fitted to any kind of vehicles including a light to medium duty trucks. These components are fixed on vehicles’ powertrain where usually the electric motor and system controller in front and battery pack at the rear. It uses high capacity Li-ion batteries for outstanding performance.

EchoDrive which integrates with vehicle’s existing system decides how best it can utilize electrical power so that your vehicle can use as less gas or diesel it can and as a result the EchoDrive powered vehicle uses lesser than 50% fossil fuel.

The features which I liked personally are cost effectiveness and environment friendly, EchoDrive is less expensive compared to others and you will get back the installation charges soon. 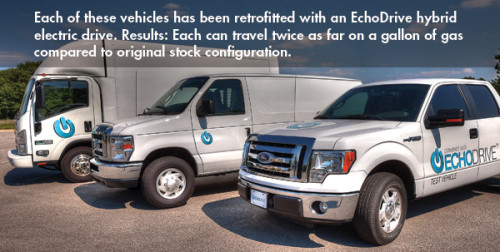 What Would be the Impact of EchoDrive on Environment?

EchoDrive powered vehicles are not only favorable to your wallet, but to the environment as well. With the EchoDrive retrofit, 35 million commercial vehicles on American roadways can be converted to hybrid vehicles, just imagine how it would be helpful for our environment.

Being environmentally conscious is mandatory especially in current situation where more than 4 billion and 160 million metric tons of carbon dioxide is produced by 800 million cars globally. Even if we manage to convert 400 million cars to EchoDrive hybrid then we can stop half of global carbon emission which automatically helps to reduce global warming.