Apple’s new map application is the laughing stock and the trending story on the social web, most users are disappointed with the map application on iPhone 5 and other iOS6 devices. Earlier today users also reported that the Apple maps redirected to the Google maps on desktop, Maybe this is because Apple maps doesn’t have a web app yet but its is embarrassing indeed for Apple. The new iOS-6 replaces Google maps with the new Apple maps which is buggy and very ill-thought out maps switch – says the tech world. 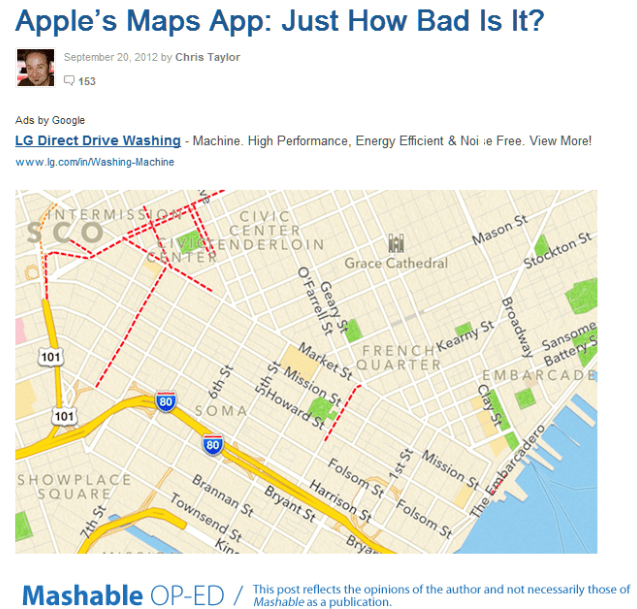 Techcrunch reports that after all that criticism from iOS users and the tech community, Apple is said to have decided to go after experienced people who have worked on Google maps and get their expertise to develop their own new maps application than doing just another software update.

After its failure to meet with the consumers expectation Apple has learned that the road ahead is tough in this field. And is actively trying to add more skilled and experienced talents to add its team.

And in other news, an iOS hacker named  Ryan Petrich has managed to port the old iOS Google Maps app to iOS 6. Ryan hasn’t released it to public yet but it is common sense that it will surely need a jailbroken device to run and with the all the despair with the iOS Apple Maps, we can surely expect people to go this route too. This is what he had to say:

Preview of the old Google Maps application from iOS5.1 and earlier running on an iPhone 3G S updated to iOS 6.0. Still crashy and cannot be distributed to the public yet, but it mostly works 🙂 Uncompressed video from DisplayRecorder: http://rpetri.ch/db/GoogleMapsiOS6.mov

This is the first time Apple is facing big time embarrassment as Apple is known to bring features in their premium form than what others offer and it also had pointed out its mapping solution as one of the selling points. We just hope Apple tries some quick fix but we don’t think it’ll be that easy for them. Right now, the iOS 6 users are at the mercy of Nokia Maps Online or Google Maps Online in the browser until Nokia or Google launch an official app for iOS. Well people are expecting Google to bring their mapping solution on the App Store and lets hope it turns out to be true.

On a less serious note,  here’s a parody video and a comic on Apple Maps which should manage to make you laugh at Apple’s expense.