We all love flash mobs, well i guess most of us surely do as they have an element of surprise and some great fun to be enjoyed. LG Electronics India have rolled out an innovative 360-degree global marketing initiative, “World Record Campaign” with the aim of celebrating LG’s historical focus on product excellence and innovation over the past 54 years and to highlight LG’s technical excellence.

Being India’s leading company in consumer electronics goods, LG has launched the ambitious campaign here in India first with a flash mob in one of the busiest venues of Gurgaon city i.e. Ambience Mall to celebrate the holiday and festival season in India. The flash mob was basically conducted to help Mr. Karan Arora, a proud LG customer to help him in a marriage proposal to his girlfriend, Pooja. The amazing flash mob was organized by the LG WR Team. 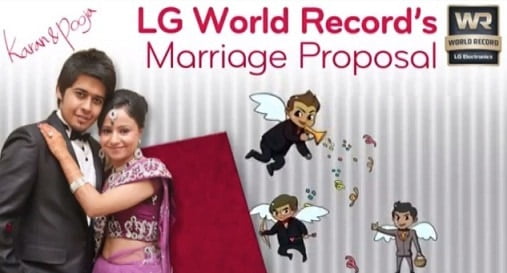 Here is the amazing video of the flash mob conducted by the LG WR team followed by its making:

How it all began

It all started with Karan interrogating about Dual Play glasses on LG’s World Record Forum on Facebook, he just happened to mention that he was planning on becoming engaged, the guy he had been communicating with was LG Electronics World Record (WR) man, Sherlock, the company’s brand ambassador on the social networking sites such as Twitter and Facebook. Well Sherlock thought of an opportunity to improve recognition of the brand by utilizing Karan’s proposal and the rest is pretty much history to say the least as Karan wouldn’t have even dreamt of his proposal becoming an international phenomenon thanks to the LG WR guys and LG on the whole for creating such an awesome event.

Although the flash mob entirely lasted only few minutes but the guys behind the whole event had to work really hard to make it  to successful as it took more than a month to get the act together with the planning and execution. 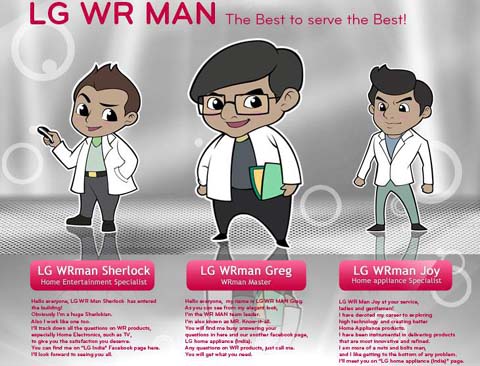 The Flash Mob Execution and Story

The event was conducted in a very secret manner and no one except the event organizers, media persons and dancers were aware about this surprising flash mob executed in a busy evening. The event started with a shot of the upmarket Ambience Mall, then Pooja and presumably her friend appear on the scene. They enter an electronics store, put on the glasses, and sit in front of a TV screen. Karan then appears on the screen and invites them to go outside and enjoy a surprise.

As the girls went down, a group of youngsters all of sudden started a coordinated dance on popular Bollywood tracks playing in background much to the surprise of all the shoppers present in the mall and also Pooja. As is the rule with flash mobs initially only few people started and later small groups joined them in middle surprising everyone. And suddenly within a minute or two, around 100 professional dancers joined the flash mob making everything look so amazing. Once the atmosphere was set the crowd too joined the mob later including children, adults and onlookers.

The motto of the event was successful Mr. Karan proposed his lady love. He fell down on his knees in full romantic style to propose Ms. Pooja for marriage. Well with the crowd cheering and yelling, Pooja accepted the proposal much to the delight of the crowd.

LG’s reason for such an event

Now you must be thinking as to what must LG get doing things like this being a consumer electronics company. Well once the flash mob ended, LG WR team leader Greg, addressed the crowd and he explained the reason for LG organizing a flash mob like this. He stated –

“We want to strengthen the association of users with LG products in line with our core motto – Life is Good. This is true not only when you are using our products, but the very association with LG can make good things happen in your life – just like this flash mob marriage proposal.”

Another member of the LG WR team Sherlock, elaborated the explanation of LG being the leading electronic brand associating with a flash mob. He said – “India is a young country with 65% of its population is below 35 years of age. Nowadays, because our society is so family-oriented, youngsters are a very important factor in buying decisions for important products. So, we thought of a way where we could associate ourselves with this core group of youth, while celebrating family values at the same time.”

If LG truly wants to be the unmatched electronics consumer company in India then these unconventional events are the key. LG has some really innovative products in their lineup which has made them be known as the go to company thanks to their TV, LM series, 3D TVs. The event truly is unconventional as it defines the new way of marketing by engaging customers and breaking the traditional marketing methodology which has been going for long. The event also helped LG in increasing the awareness about the LG World Record Campaign.

LG India recently uploaded the video of this flash mob in YouTube which is going viral day by day. They even made a post about this event in their official Facebook Page. LG has officially released the Behind the Scenes video of the event too that elaborates how the group of professional dancers were doing the rounds in net for some time and the uniqueness of the event.